FPSOs in the Gulf of Mexico

How did the industry transition from the original discussion about the possibility of using FPSOs in GoM at the start of the industry campaign in 1997-98 to where we are today?

irst, we are referring to the U.S. side of the Gulf of Mexico.  The Mexican side had its first FPSO enter service in 1989 (converted at Green's Bayou in Houston by Brown & Root). This was followed by an FSO in 1998 (chartered from Modec) and then the second FPSO in 2007 (chartered from BW Offshore).

One must go back to 1997-1998 for the first serious and open interest from operators for use of an FPSO in GoM. Texaco had interest in using an FPSO for developing its Fuji discovery.

Texaco stirred interest in industry collaboration through its management role in DeepStar to fund and approve the generic Environmental Impact Statement (39MB) (EIS), which was performed by MMS over 1999-2001.

This was an important move since the EIS meant that approval of an FPSO in principle could be obtained, allowing oil companies to consider FPSOs as one of the tools in their toolbox of field development solutions for deepwater GoM. Part of the EIS effort meant approving shuttle tankers to work with FPSOs for export of oil production from the FPSO to GoM ports.

In September 2002, the FPSO Global Workshop addressed "What's next for FPSOs in GOM?"

The industry buzz on FPSOs at that time was caught by the house magazine of the American Bureau of Shipping ABS Surveyor, Spring 2003: "The Evolving Role of the FPSO" quoted views of several leaders in the FPSO business, including Peter Lovie. 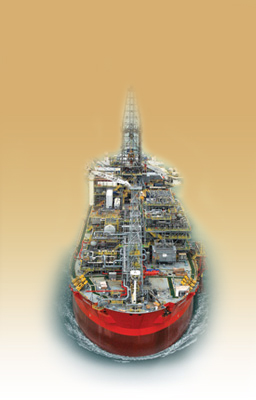